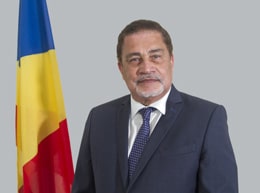 Mr. Sylvestre Radegonde was appointed Minister for Foreign Affairs and Tourism in November, 2020.

Immediately prior to his ministerial appointment, Mr. Radegonde had been the Ambassador Extraordinary and Plenipotentiary of Seychelles to France since April 2017. He was concurrently appointed as Ambassador to Russia, Andorra, Cabo Verde, Italy, Monaco, Turkey, Morocco, Portugal, Spain and Austria.

Between 2006 and 2016, Mr. Radegonde worked in the private sector in Seychelles and the United Kingdom.

He briefly held the position of Chairman and Chief Executive Officer of the Seychelles Tourism Board (STB) in 2005.
Between 2004 and 2005, he was the Principal Secretary for the Ministry of Foreign Affairs.

Between 1987 and 1989, Mr. Radegonde served as the Chief of Protocol and Desk Officer for the Americas before being posted to the Seychelles High Commission in London as Counsellor/Acting High Commissioner. He was appointed High Commisioner to the United Kingdom in 1992 and in 1993 was appointed Ambassador to Belgium and the European Union with concurrent accreditation to Germany, Netherlands and Luxemburg until 1997.

In the mid-80’s he worked for a while in the hotel industry in Seychelles.

Mr. Radegonde has held several other responsibilities which includes Chairman of the Small Islands Developing States (SIDS) Group at UNESCO, Chairman of the Board of Directors of the Seychelles Fishing Authority (SFA), Alternate Governor for Seychelles to the International Monetary Fund (IMF) and Chairman of the Sub Committee for Administration and Finance of the African, Caribbean and Pacific (ACP) Secretariat.

He is married with three sons.

Copyright © 2021 – All rights reserved. Consulate of the Republic of Seychelles.